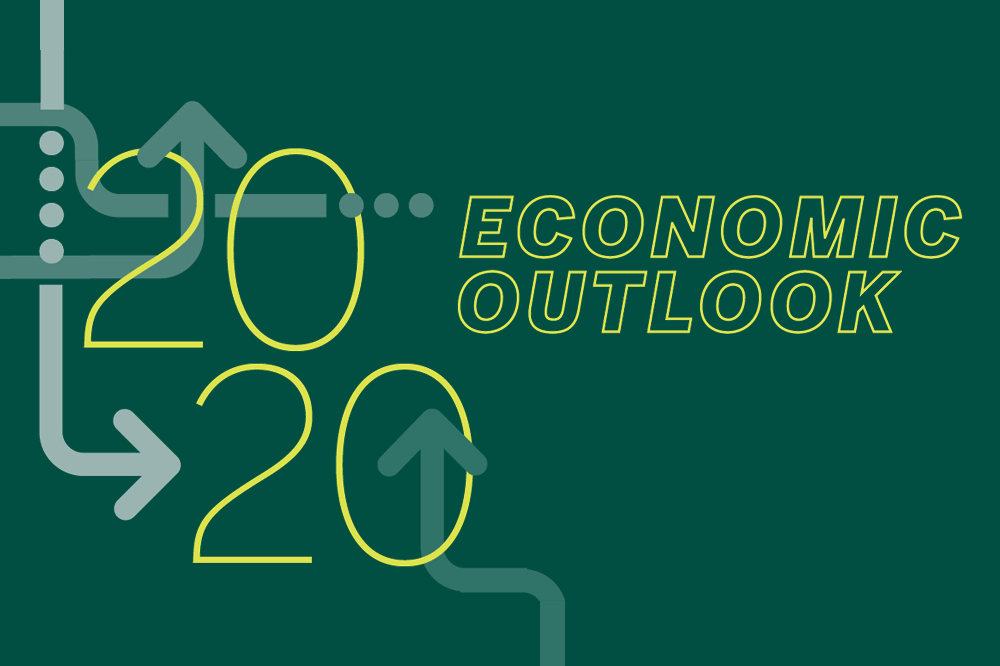 It’s hard to avoid recession chatter these days. Fueling
such talk has been a slowdown in the pace of the economic growth in 2019 and
the widespread expectation that the long-running economic expansion, which
began in June 2009, is nearing its end. The economy is expected to grow
modestly—by 2.2%—in 2020, barely higher than the projected growth of 2.1% in
2019, and much slower than the 2.9% expansion in 2018, when the economy got an
initial boost from the federal Tax Cuts and Jobs Act.

Still, National Association of REALTORS® Chief Economist Lawrence Yun says
a recession is unlikely in the year ahead. “We expect 2020 will be a year of
slower growth but not a recession year. However, an all-out trade war would
lead to an economic downturn in nearly every country, including the U.S.,” he
says.

The negative effects of the U.S.-China tariff fight included
contracting exports and slumps in investor confidence and business spending.
But overall, the economy has continued to grow on the back of strong consumer
spending, generating about 2 million new jobs in 2019, with real wages rising.
Unemployment reached a low of 3.5% in September, and job openings exceeded the
ranks of the 5.8 million unemployed workers. The unemployment outlook remains
steady at 3.8%. And the Phase 1 trade agreement with China,
announced in January, takes pressure off industries that were feeling the
effects of threatened tariffs. 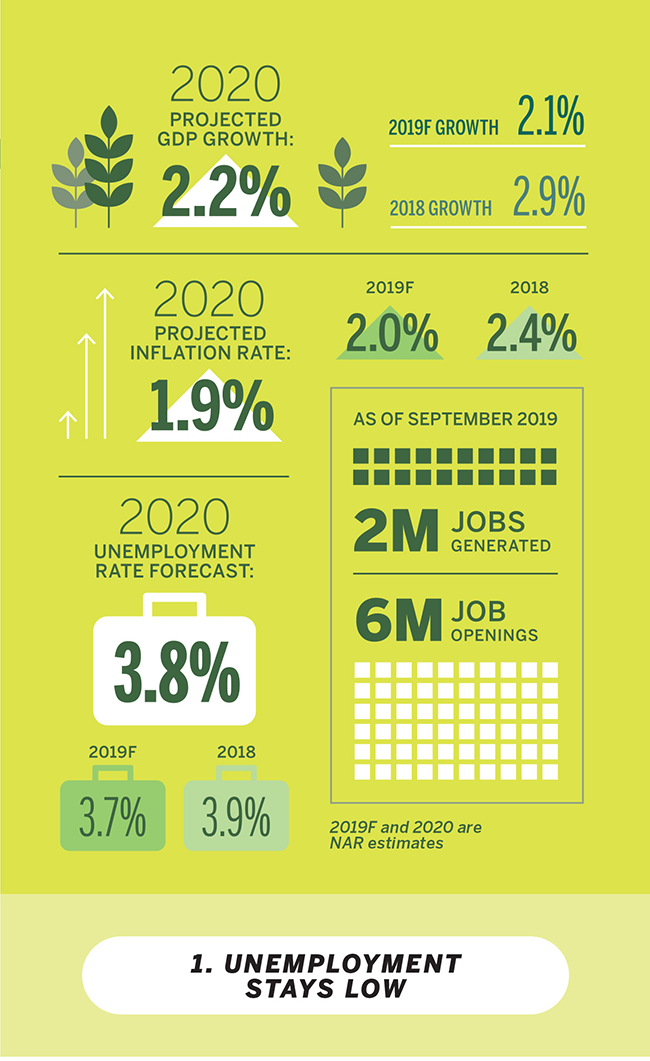 “We don’t foresee the Fed raising the federal funds rates in
2020. A rate cut of at least 25 basis points in early 2020 is the likely
scenario,” says Yun. With the Fed maintaining a low-interest-rate policy, the
30-year fixed mortgage rate is expected to average 3.8% this year. Rates for
15-year fixed mortgages are also trending downward, from 3.4% to 3.1%. Low
mortgage rates make purchasing a home more affordable, especially among the
46.5 million 25- to 34-year-olds who made up last year’s largest segment of
home buyers. Given the existing conditions, home sales—existing and new homes
combined—are expected to increase by a little over 4%, from 6 million in 2019
to 6.3 million in 2020. 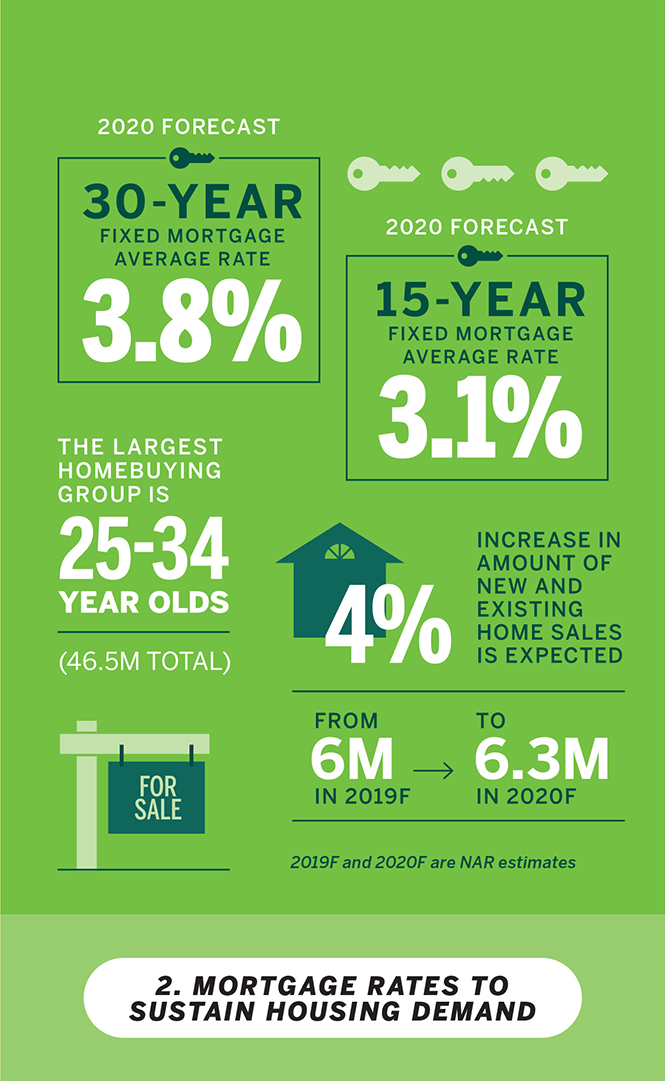 Lack of housing inventory has been the primary constraint on
the housing market. The housing supply is expected to improve this year, with
housing starts expected to hit 1.42 million, up from 1.27 million last year.
Still, the new supply will not meet the demand that will be created in 2020 by
new household formation, estimated at 1.2 million, and demolished or obsolete
housing, estimated at about 450,000. “Ramping up housing construction will
continue to be central to improving home affordability and raising the level of
home ownership,” says Yun. 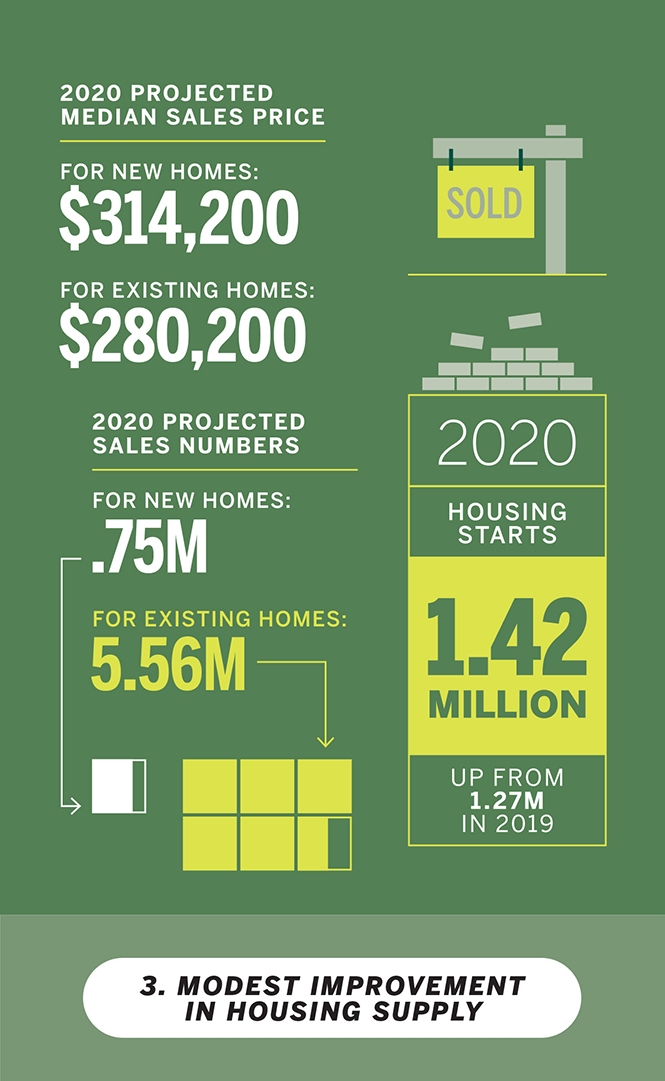 Industrial properties are expected to continue to offer good returns for
investors given the sustained demand for industrial space from online and
traditional brick-and-mortar stores. Both are fiercely competing for consumer
loyalty and spending by offering both offline and online shopping options.
Examples include Amazon buying Whole Foods, Walmart offering delivery services,
quick consumer gratification through one-day or same-day delivery from Amazon
and other retailers, and experiential shopping, such as yoga clothing retailer
Lululemon offering yoga classes.

– Reprinted from REALTOR® Magazine Online, January 2020,
with permission of the National Association of REALTORS®. Copyright 2020. All
rights reserved.